Image of the product: 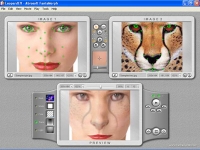 Main aim of the software:

What does the software allow you to do?:

You can create morph movies between any two images
Morphing pictures in sequence;
Morph movie;
Morph movie with add-on effects;
Professional morph movie using 32-bit with alpha images;
you can create an animated warp from a single source image;
Beginning with version 3.5, you can easily create a multiple morph from a series of images;
Beginning with version 3.5.5, you can compose a virtual face with multiple real faces. (Only available in FantaMorph Deluxe)...

FantaMorph supports most image formats including BMP, JPEG, TIFF, PNG, GIF, TGA, PCX, and even professional 32-bit with alpha formats. Exporting to Image Sequence, AVI, Animated GIF, Flash, Screen Saver, Standalone EXE and other formats are supported. You can crop, rotate, flip and adjust source image, all with FantaMorph's built-in tools, without having to go to any additional software.
FantaMorph takes advantage of hardware acceleration, and the rendering speed easily goes up to several hundred FPS (Frames Per Second). The high speed makes it possible to play final effects in real time without exporting to a file.
The Professional/Deluxe edition supports creating multiple morph, which makes it a breeze to create long movies with multiple source images.

What formats does the software uses or import and export?: